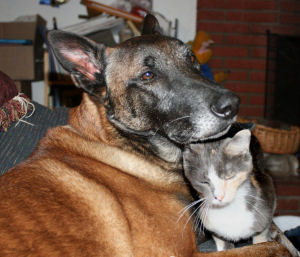 On a regular basis I see on social media people talking about an "off switch" and how the Malinois doesn't have one.  Especially the working line Malinois.  People post their daily routine with their dog, which includes 2 hours of training, 1 hour of fetch at the park in the morning, a 2 hour run in the evening, and then boast about how the dog still wants more after all that.  Or photo after photo of their dogs destroying their homes.  When people do post photos of their dogs actually being calm in the house, they are many times met with derision and comments about how it must not be a "real Malinois" and is obviously lacking in drive and working ability.

I've owned Malinois since 1993, all working lines, and I have to say this is crap.  Barring serious temperament or nerve issues, there is NO reason a good Malinois can’t have an "off switch".  With some dogs this is genetic, with others it needs some training.  A large part of it is simply the expectations of the owner.  If you think your dog is going to require insane amounts of exercise, then it probably will.  I mean seriously who can have a family, full time job, and still have 5+ hours a day to "wear out" their Malinois.  Personally I love the breed because they make doing things with them easy, not because they make my life difficult.  I think people also don’t realize with all this exercise they are giving the dog, hoping to wear it out so they can live with it, all they are doing is building stamina.  An "off switch" is not a state of physical exhaustion, it’s a state of mind.  Some come by it easier than others, just like some people are more able to relax than others.  But all of them should be capable of it.

So Why the Claim of No "Off Switch"?

I believe when people say the Malinois has no "off switch", there are a couple of things at play. IMO there is a solid percentage of people who own Malinois for sport, who don't actually like the breed.  They like the winning they can do with the breed. The dog is nothing more than a tool to them to get on the podium and earn trophies, or a demo dog for their business to gain clients.  So buying into the whole "a good Malinois doesn't have an off switch" thing gives them a reason, in their mind, to leave their dog in a kennel/crate except when they actually want to train or compete with it. Then they get a different dog/breed to be their actual companion and house dog.  I talk to these people on a regular basis, you know the ones, that say "I would never have a Mal if I wasn't doing X sport".

Then there are a lot of pet people who want to feel they own a "real Malinois", so they buy into this same thing they hear from the competitors about their dogs. And while they are trying to make their dogs family pets, they are also trying to make them "real Malinois", which means keeping them in a constant state of arousal by playing games all the time, making every interaction stimulating, letting them tear up their homes, etc.  They actually post photos and accounts online of the 1000s of dollars of damage their dogs do to their homes, with a little shrug like "eh what can you do, it’s a Malinos".   Puppy damage is one thing, they are still young, learning the rules, and in some cases growing into their brain 🙂  They are going to explore their world, and most puppies use their mouth when doing so.  Especially in a breed bred for bitework.  2 and 3 year old adults who are routinely still tearing up couches, tearing holes in the drywall, etc is another thing completely.

And then there is of course the chunk of the Malinois population that doesn't suffer from high drive as much as thin nerves and over reactivity, and are so on edge because of their nerves/reactivity that they really do have a hard time ever settling. And unfortunately some people can't seem to tell the difference between drive and nerve, and breed these "insane over the top drive" dogs.  Yes, the Malinois is supposed to be more aware, or reactive, to its environment than some other breeds.  It’s not supposed to be so reactive that it can never mentally "turn off" and actually relax. 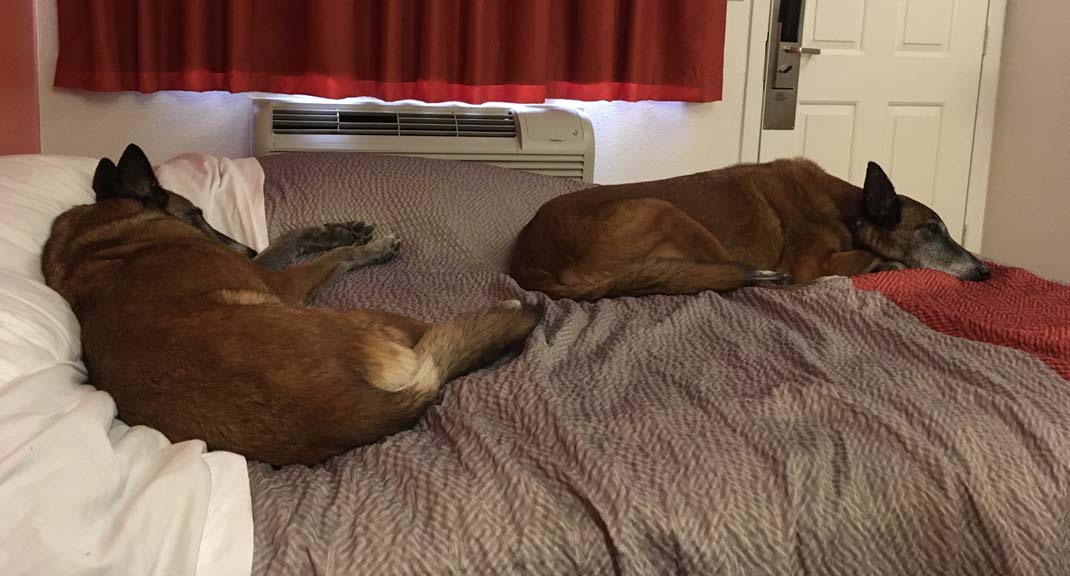 Over the years I have had 7 FRIIIs, an IPOIII, a Herding Champion, and numerous other dogs/titles in my home.  All Malinois.  I’ve trained/competed with dogs in French Ring, MondioRing, Schutzhund, PSA, NADF, Herding, Agility, Obedience, Tracking, Weight Pull, Flyball, Nose Work and other venues.  These are not dogs lacking in drive or working ability.  Some I raised, others came to me as adults.  I’ve also raised multiple dogs that have gone on to be police dogs.  All of these dogs were capable of relaxing. The ones I raised, were raised that way.  As pups some were more active than others, some needed more encouragement to settle in the house or car than others.  Some had to be watched closer because they were more prone to being destructive as youngsters.  Some need more exercise, physical and/or mental.  But they all learned to settle, if they didn’t just do it naturally.  The ones acquired as adults, either came with an "off switch", or were eventually taught to be good house dogs.  And by "good house dog" I mean a dog who can be left unsupervised in the house without destruction.  A dog that can lay calmly on its dog bed for hours in the evening, without needing extreme amounts of exercise or training to get there.  A dog who can relax, and even nap, in its crate in the vehicle when we are at training, even while other dogs are being trained out on the field a short distance away.  IE a dog you can live with.  A dog with an "off switch".  A dog that when it's finally your turn at training, after having been there for a few hours, comes out of the crate rested and ready to work.  Not already so gassed out, because it's been spinning and barking for the last 3 hours, that it's done about the time you finish getting it's gear on.

One of the main reasons people like Malinois is they are so trainable.  So raise your standards, and if your dog doesn’t have the genetic off switch, train it.  Your dog will thank you for it.  When breeding or purchasing, look for dogs that have both high drive, and solid nerves.  See what the dog, or the parents of your new pup, is like out of drive.  Drive can be used to cover so many things, what is that dog like when it’s not being stimulated?  That’s when you will see the real dog.  Don't just say "eh, it's a Malinois, they have no off switch" and accept that your dog is going to be PITA for the next 12-16 years.

How do I Teach an "Off Switch"

If you have a dog with a genetic off switch, be happy and skip this section 🙂  When you have a dog that resists settling, for whatever reason, there are usually a couple main areas to be addressed.

1) make sure they are getting both physical AND mental exercise

Physical exercise is easy.  Take them for a run, play fetch with a chuck-it, go for a long hike, etc.  Mental exercise is more often what is lacking in the dogs routine.  Hit google for ideas, but searching games are one great way of wearing out your dog’s brain.  Rapid fire commands for skills they already know also works well.  Learning a new skill is another.  There are a wide variety of toys/puzzles that you can purchase.  I cannot stress this enough.  If your dog is not getting appropriate outlets for its drive and energy, you will have very limited success, if any, trying to teach an "off switch".

I'm going to assume you have already "hit" #1 and your dog is suitably exercised.  Removing their ability to exude "nervous energy" and teaching them that calm is required in certain settings, can be done by using a place board so they can't get up and run around non-stop.  My favorite for this is a piece of plywood, sized for the dog, with carpet tacked on top of it.  In the middle attach a clip, so you can clip it to a short chain that is attached to their collar.  When sized right the dog can move around in a limited fashion but can't leave the board, their own weight on the board is what keeps it down.  It can be moved around to use in different locations in the house, in a crate, etc.  This allows you to put the dog there, and leave them without having to interact, go back and replace them if they leave, etc.  All that interaction just fuels their refusal to settle.  When they do relax, you can unclip them, if they get nutty again, put them back.  I like to use a long line through the clip, I have to put more effort into keeping them on the board, but once they settle I can release them without them realizing I have even done it.  Versus getting up and walking over there, which may trigger frenetic energy again.  Eventually they will understand a calm state of mind is rewarded.  The same for when they are in a crate.  If they circle non-stop, cross tie them or run a leash through the door to their collar so they can't spin.  Just make sure it's done correctly and you monitor them so they can't get themselves hung up.  Or set up a similar place board system, but with the clip towards the front of the board.  If they are barking, then I use an e-collar.  Cover the crate so they can't see and simulate even more.  If you stop the behavior, eventually the new behavior (calm) will become a habit, even if it's initially "forced calm".

If you want your dog to learn to be calm, then you need to teach them in a calm environment as much as possible.  Your dog is not going to learn to be calm if the other beings, 2 and 4 legged, around them are not also being calm.  Putting the dog on a place board, when you have kids running non-stop through the house, or other dogs racing around, is not only not going to work, it's not fair.  Work on this in the evening, when everyone is sitting down watching a movie.  Asking the dog to learn to be calm in a crate in a vehicle full of barking dogs, is not going to work.  Move your vehicle further away from training and any barking dogs.  Cover your dog’s crate with a towel so they can't see.  Put a radio right next to their crate so they can't hear as well.  See if you have a friend with dogs that are calm in the vehicle, and try putting your dog’s crate in there.  Dogs learn a lot by watching what other dogs are doing.

Will these things work for every dog.  Unfortunately no, some dogs just have so much nervous energy, and are wired in such a way, that they truly can't settle.  But this will work for many dogs, and make them much easier to live with, and better working dogs.

22 thoughts on “The Elusive Malinois “Off Switch””