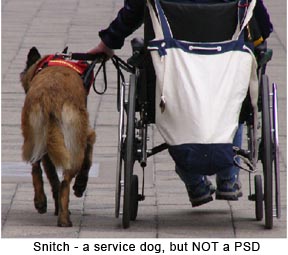 Psychiatric Service Dogs (PSDs) are defined as "a specific type of service dog trained to assist their handler with a psychiatric disability, such as post-traumatic stress disorder (PTSD), schizophrenia, depression, anxiety, and bipolar disorder."

One of the most common inquiries I receive for Malinois as PSDs is for people with PTSD.  Post-traumatic stress disorder (PTSD) is a mental health condition that's triggered by a terrifying event – either experiencing it or witnessing it. Symptoms may include flashbacks, nightmares and severe anxiety, as well as uncontrollable thoughts about the event.  People with PTSD may feel sadness, fear or anger; and they may feel detached or estranged from other people.

Like all assistance dogs, a psychiatric service dog is individually trained to do work or perform tasks that mitigate their handler's disability. Training to mitigate a psychiatric disability may include providing environmental assessment (in such cases as paranoia or hallucinations), signaling behaviors (such as interrupting repetitive or injurious behaviors), reminding the handler to take medication, retrieving objects, guiding the handler from stressful situations, or acting as a brace if the handler becomes dizzy. Moreover, the dog can be an extremely useful companion in any controlled training concerning cognitive functions, as "walking the dog" for instance, which simultaneously offers any person several situations or encounters where cognition activates.

For the last few years, I have been receiving requests from people wanting to purchase a Malinois as a PSD, specifically for someone with PTSD.  As the popularity of the breed increases, the numbers of requests I receive have also increased.  While every dog is an individual, and there are some individuals in the breed that are appropriate for this type of work, let's look at the job required, and the breed as a whole.  And yes, that means I'll be making generalizations.

Malinois are a herding breed that has more recently been bred with a focus on protection sports and police work.  More recently being at least the last 70 years or more.  Not all breeders are focusing on this area, some focus more on conformation, performance events such as obedience, agility, etc. and good family pets.  But the majority of breeders in the United States are focusing on working dogs.  When asked to describe this breed common terms used are intelligent, reactive, protective, high drive, high energy, aggressive, territorial, aloof, and loyal.  Many times one of the main descriptors a person will give will be specifically how well the dog bites.  "full hard grip" "brings aggression in the bite work" etc.

Some of the common symptoms of PTSD are agitation, irritability, hostility, hypervigilance, self-destructive behavior, or social isolation.

Dogs bred for protection and police work require confident handling.  They need someone who is in control of their emotions, so they can focus on controlling their canine partner.  Many times when watching newer or more emotional handlers you will see the handler getting more and more excited or stressed as they work their dog, and the dog getting more and more spun up in response.  The point of a PSD, specifically for PTSD, is for the dog to help the handler control their emotions by helping remove the person from the situation or giving them something else to focus on beyond what is triggering their attack.  Pairing a dog with a tendency towards reactivity, and even worse a tendency towards aggression when they react, with someone whose issue is that they overreact in situations, is a recipe for disaster.    Chances are good the handler will feed off the dog, and the dog will feed off the handler.  Instead of each having a calming effect on the other, they will "throw fuel on the fire" and the situation can potential spiral up and out of control.   I suspect one of the main draws towards Malinois from people looking for a PSD is that they feel a dog who can protect them will help give them confidence in social settings.  But who is going to protect the dog, and the general public, when the dog misreads the handlers stress as an innocent bystander being a threat, and reacts accordingly?

Can you find individual Malinois that would be successful PSDs?  Yes, of course you can.  But instead of looking for that 1 dog in 50 who can do the job, why not look towards a breed more suited for this type of work, where 1, or more, in 10 will be successful.  The Labrador, Golden Retriever, Poodle, Boxer, Great Dane or Border Collie would be better choices.  And if you want a dog with more of a protective personality and appearance, look into the German Shepherd.  While they will have the protective instincts of a Malinois, they are bred for a calmer, less reactive, disposition.

3 thoughts on “Malinois as PSDs – Adding fuel to the fire”