I see posts on social media all the time regarding breeders advertising on Craigslist.   With most people of the opinion that if somebody advertises there, they are automatically an irresponsible breeder AKA back yard breeder, who needs to be shut down ASAP.

I have never understood the concept that advertising on Craigslist, puppy sale websites, the newspaper back in the day, etc. automatically makes you bad. What makes you a good or bad breeder is your breeding and placement practices.  Does the breeder health test?  Are the dogs tested/titled in breed appropriate working/performance venues?  Are potential buyers screened to determine if they are a good fit for the pups being produced?  Does the breeder stand behind their pups, offering a guarantee, support throughout the pups life, etc?  Were the parents choosen carefully and the breeding done with specific goals in mind?  Those are the hallmarks of a good breeder. 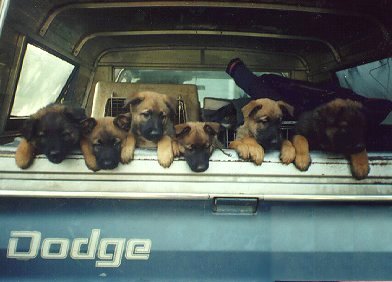 If good breeders would advertise all the same places as bad breeders did, then people looking in those places for puppies might actually see both sets of ads and start to wonder why one ad includes health testing, titles, guarantees, etc. with links to pedigrees full of the same information, breed-specific information, photos and videos of dogs in great shape doing a wide variety of things, etc. and the other ad is basically the pups yours if the check clears,  no further information and the photos may or may not show dogs in the best of condition.   And not only that, many times those puppies are all the same price to boot. Why wouldn't somebody then pursue the good breeder for their next pup or at least start to educate themselves on why there's such a difference in the ads?  If a breeder doesn't have a litter available at the moment, they can always advertise their breeding plans for the year instead.  Giving people checking those websites even more time to think "maybe I should do a little research, and see why Breeder A might be a better choice then Breeder B".  Those of us already "in the know" know where to go to find information on our next breeder.  It's those that don't who are slipping through the cracks and end up supporting irresponsible breeders.  It's easy to blame people for not doing their research, but if they don't know that they lack information, someone needs to get them started down the right path.

The same could be said for breed and performance clubs.  If they would advertise upcoming events, locations to find more information about the breed, sports they compete in, etc. in the same places those "bad breeders" advertise, they would reach a larger group of people, and present more educational opportunities to the public.  My entry to protection dog sports back in the early '90s was actually due to finding an ad in the local newspaper, advertising a French Ring demonstration.

I would also argue that rescues should advertise in these locations.  Get the word out about dogs available, but also make people really think about WHY those dogs ended up in rescue in the first place.  Talk about how if the dog had a responsible breeder backing it up, it could have gone back to them instead of into rescue.  Or the owners would have had more resources when they ran into problems.  Or a pre-purchase interview might have led to the owner realizing this wasn't the breed for them.  Or more thought put into which puppy they took home might have led to a better fit for their situation.

I will say it again. What makes you a good or bad, responsible or a responsible breeder, is your breeding and placement practices. Not where you advertise.

One thought on “Does Craigslist Equal Irresponsible?”